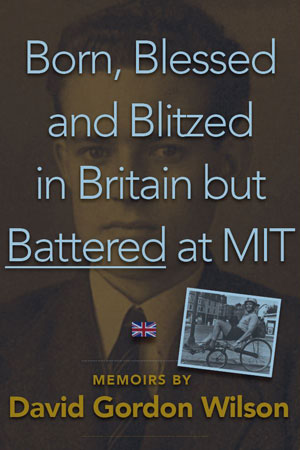 Born, Blessed and Blitzed in Britain but Battered at MIT

David Gordon Wilson, emeritus professor of mechanical engineering at MIT and bicycling expert, chronicles his adventurous life in his new book: Born, Blessed and Blitzed in Britain, but Battered by MIT. His stories range from growing up during the bombing of Britain in WWII and spending time as a child at a nudist camp, to teaching in Nigeria and leading the nonsmokers’ rights efforts in New England. The author describes the protracted battles he was involved in at MIT, in which the university protected senior people who lied, plagiarized and cheated without apparent concern. Wilson asked for a hearing on multiple gross plagiarisms at MIT, including one acknowledged by the plagiarist who said, “You should feel complimented when a senior person copies your ideas!” Wilson’s request for a hearing was denied. The book includes a light-hearted collection of stories and essays covering Wilson’s enthusiasm for human power and bicycling, including details about his co-design of a bicycle that won, twice, the world bicycle speed record.